Nigerian global musical artiste , Burna Boy whose fondly called African Giant has finally broken his silence on the issue of the End Sars protest that has been going on across different states in Nigeria. 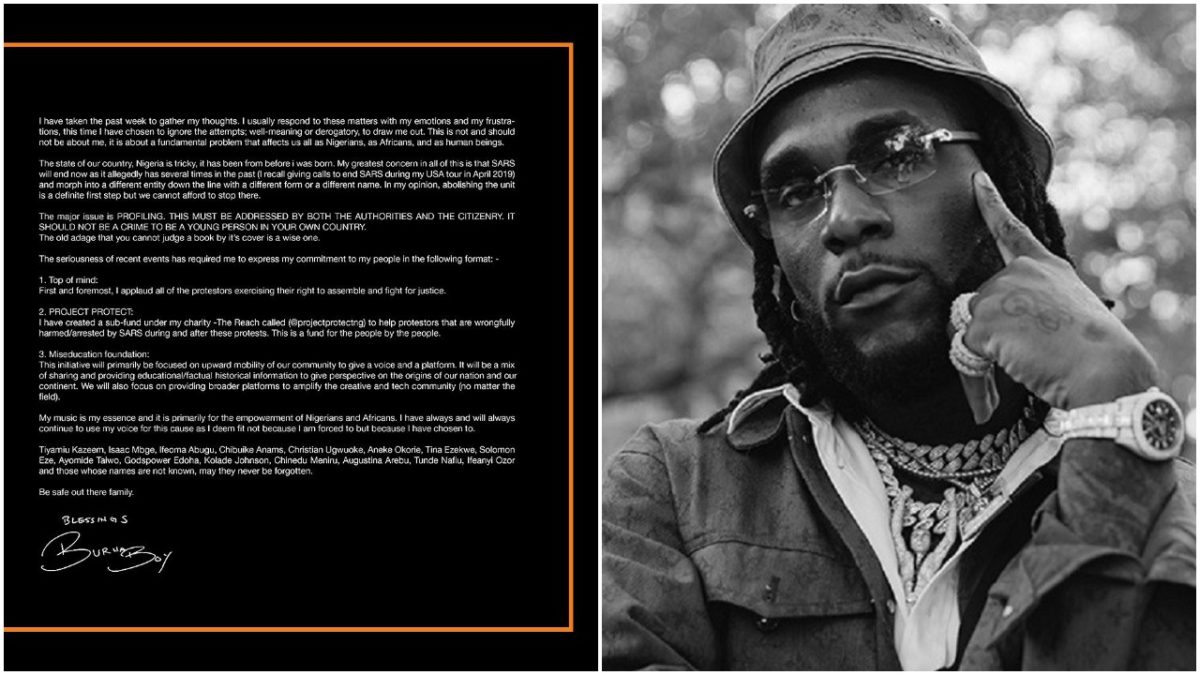 Recall that the Protest Kicked off on Thursday this week as Runtown, Tiwa Savage,

a Peaceful protest as they call on the Nigerian Government lead by President Buhari to shutdown the SARS unit under the Nigerian Police Force.

to social media to call most of them out, especially Burna Boy whom has been known

leadership of the country via his music.

revealing that he has always been here fighting for his people , but this time around

decided to take a much more advanced approach instead of letting his emotions and outburst control him.

bring genuine progress and not for any Political gain.

the issue of Police Brutality and the End Sars campaign.

Read the full Press release Below:

I have ALWAYS been here Fighting for my people anyway and anywhere that can possibly bring genuine progress and not for any Political gain, accolades or public validation. I have tweeted, spoken , sang for years, I’m Glad everybody now sees the need to do more. So let’s do that, each of us, in his or her own way. Follow @projectprotectng #ENDSARS #ENDPOLICEBRUTALITY #ENDYOUTHPROFILING

Violette - August 21, 2019 0
Reality star Kim Kardashian has been accused of a photoshopping error as a new promo pic for her perfume collaboration with sister Kylie Jenner...

Olumide - November 11, 2015 0
Just days after confirming in an interview that she wants to take out her breast enlargement and reduce her butt enhancement she posted this pics above and captioned it: kmichellemusic????? Kelly...

Victoria Azarenka might not play at the U.S Open Due to Child Issue

Olumide - August 19, 2017 0
Two-time Australian Open champion Victoria Azarenka says her participation in the U.S. Open is in doubt because she might not be able to bring her son...