33-year-old Nigerian lady rescued from slavery in Lebanon, Ms. Gloria Tayelolu Bright, has narrated how she spurn a false tale around her waist beads that saved her from being raped in the Asian nation. 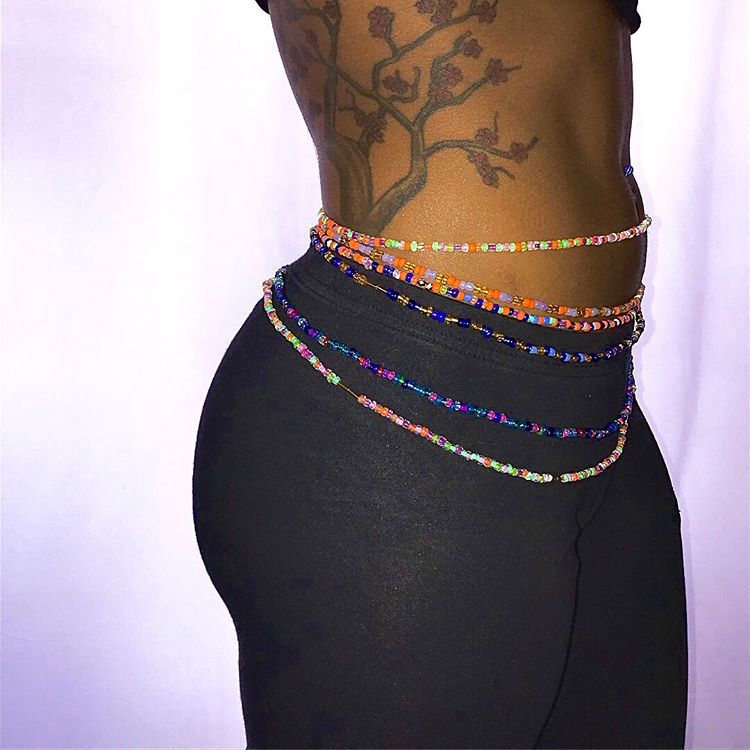 The 33-year-old Eruku-born lady in Ekiti Council of Kwara State, a single mother of two children, a boy and a girl, kept her planned move to Lebanon a secret only to later find out she was being sold out for slavery but luckily for her, a waist beads she had bought for fashion years ago, saved her from rape.

Gloria before being handed over to officers of the National Agency for Prosecution of Trafficking in Persons (NAPTIP) in Oshogbo, Osun State, on Thursday, told The Guardian in Ilorin that she had mistaken any trip abroad for “instant wealth and Eldorado.”

She shared some of what she went through but withheld some due to the ongoing investigation of her case by NAPTIP.

“When I bought my waist-beads some two years ago, I did so because of fashion. But do you know that the beads eventually saved me from the hands of those who lured me to the far Lebanon for slavery related endeavours?”

“I was linked up by a fellow who facilitated my movement to Lebanon sometime in October last year. The fellow dangled before me a teaching job of English language if I would go, even though my academic qualification is Ordinary National Diploma (OND) in Accountancy.

“There was no nexus between what I read and what I was being offered, but the desire to travel abroad overwhelmed my sense of reasoning as at the time in question.

“The first thing I observed on getting there was the inclement weather condition. The cold was so much on my health that each time I coughed, I was throwing up blood-stained sputum with serious chest pains. Besides, rather than taking me to any school as a teacher as planned, I was subjected into a house help job, fetching water with heavy buckets from a distance location into the storey building apartment I was housed in. I was working like a slave, doing all sorts of menial jobs.

”To worsen my situation, my master started making advances towards me. I tried all I could to ward him off, but he would not relent. I had to call him aside one day to let him know that no other man could sleep with me aside the one that gave me the waist bead. He dared me by asking me of the likely consequences of him having the affair with me, despite the repeated warnings.

“I promptly told him that such a man would be mentally deranged for six days and that on the seventh day, he would die. That narration calmed him down temporarily and it gave me a momentary sigh of relief. That was how my waist beads saved me from being raped. But my life became miserable and I had to think of the way out of it, so that I would not die in a strange land.

“I suddenly discovered that there was a Wi-Fi telephone network within the house and that afforded me the opportunity to send the video of my ordeals that I learnt became viral. In the process, the Phemic Life Support Foundation, based in Ilorin, with office in Lagos and headquarters in London, came to my rescue. I am happy to be home at last; there is no place like sweet home.

“I want to warn other Nigerians who think abroad is a paradise to think twice before embarking on a wild goose chase.”

Ekiti Election: Photos of PVC Holders Receives Money and Gifts as Bribe to...

Violette - July 14, 2018 0
There has been a large turnout of voters at Ado-Ekiti, the Ekiti state capital as the Governorship election in the state takes place today. Many including...

”President Buhari Will Hand Over To PDP On Next Democracy Day” Party National Chairman,...

Eddie Andy - May 30, 2018 0
National Chairman of PDP, Uche Secondus, says he is very certain that next year democracy day, President Buhari will hand over power to PDP. In...

Eddie Andy - June 15, 2019 0
"Learn the wisdom of compromise, for it is better to bend a little than to break." —Jane Wells Compromise when it comes to relationships, is the...

Violette - July 29, 2019 0
The Rufftown Records signee, Wendy Shay has lost her mother’s house to fire. The disaster that happened in Germany damaged some part of the...