Chioma, to be wife of Nigeria singer and songwriter, Davido has been involved in an heated exchange with fans who tend to caution her on how to feed her new born baby, Ifeanyi.

The popular chef who gave birth to her baby boy some months ago released a video of herself feeding her boy as she dance to the new music of her hubby, Davido.

However, some set of fans who seems not too pleased with the way she’s feeding Ifeanyi noted that she should let him suck her breast in order to have a close bonding with the child.

Chioma who seems fed up with the advice silenced them by asking them to leave her alone. 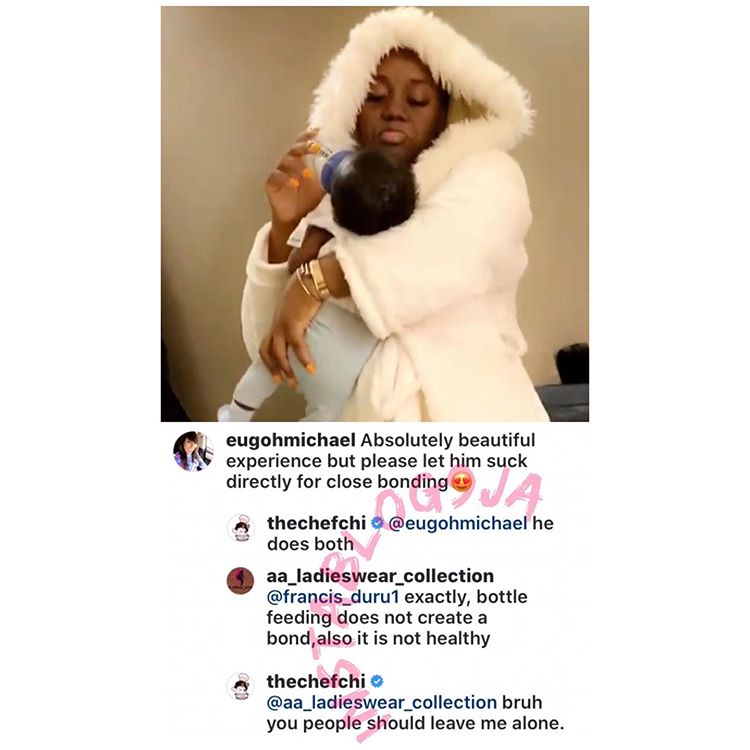 Olumide Oluwaseyi - November 23, 2018 0
Veteran comedian, Alibaba took a photo of two soldiers rising on the same bike without helmets and he criticized them for it. He wrote: “Like I said...

Olumide Oluwaseyi - August 30, 2018 0
DMW signees, Peruzzi and Fresh VDM have been called out for donning Davido’s used clothes in the recent released Aza video. Following the release of...

Throwback Photo Of Young Toke Makinwa And Her Late Mum

Olumide Oluwaseyi - April 20, 2019 0
Serial entrepreneur and OAP Toke Makinwa in the spirit of Easter took some time to shares some very old memories and photo of her...

Olumide Oluwaseyi - February 3, 2018 0
NBA star,Steph Curry and Ayesha Curry are expecting their third child. Ayesha announced the big news on social media on Friday with a photo of her...

Anita Joseph shows off her boobs in new photos, says “If your bae does...

Joel Adesina - May 27, 2020 0
It is so clear that Anita Joseph is a popular celebrity and  a Nigerian star entertainer. Anita Joseph is blessed with massive hips, bum and...