Queen Latifah’s lesbian partner Eboni Nichols is reportedly pregnant and according to a report from Radar Online, the duo are planning to seal the deal after being engaged for a while. 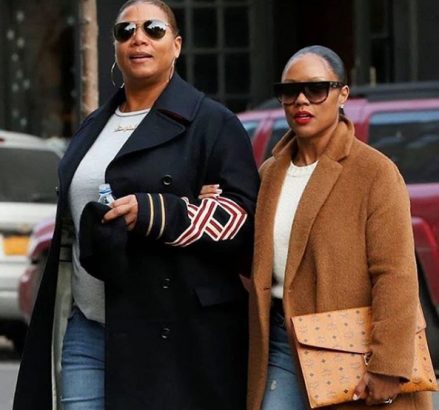 Latifah has remained notoriously tight-lipped about her personal relationship over the years.

She was first spotted with Nichols back in 2013 and have made numerous public appearances, including the 2015 screening of Bessie in Los Angeles and 2016 U.S. Open.

In a 2017 interview with E! News, the pioneering Hip Hop artist said she was ready to settle down.

“I’m a little bit of a procrastinator. I had some things to deal with. I had to get a lot of partying out of my system early in life for about 40 years. You know what I’m saying. I’m good now. I think I’m ready.” he said

In March, she announced the passing of her mother Rita Owens. The latter had reportedly had difficulty with a heart disease she had dealt with for 14 years.

The rapper penned down her emotions with words that portray Owens as a lovely soul.

“It is with a heavy heart that I share the news, my mother, Rita Owens passed away today. Anyone that has ever met her knows what a bright light she was on this earth. She was gentle, but strong, sweet, but sassy, worldly but pragmatic, a woman of great faith and certainly the love of my life.

“She had struggled with a heart condition for many years and her battle is now over. I am heartbroken but know she is at peace. Thank you for your kindness, support and respect for our privacy at this time. Much Love, Dana Owens (aka Queen Latif‎ah), forever Rita Owens’ daughter.”

Latifah and Nichols met in 2009 on the set of Dancing with the Stars and have been very close ever since. If they are in fact expecting a child together and engaged, we wish them many happy years to come.

I’ve had my share of women, no time for them – Bolanle Ninalowo Reveals

Olumide Oluwaseyi - May 4, 2019 0
Although he has played several roles in the Nigerian movie industry since he joined about four and a half years ago, most people still...

WIZKID & THIRD BABY MAMA ‘UNFOLLOW” EACH OTHER ON INSTAGRAM

Violette - July 16, 2018 0
Wizkid and his third baby mama, Jada Pallock, “unfollow” each other on Instagram. It will be recalled that when the other baby mamas slammed Wizkid...

Olumide Oluwaseyi - October 6, 2016 0
Her name is Petra Kvitová and is a tennis Professional player.,she is 1.83m tall and has a powerful left handed play. She had a first major tennis Breakthrough at...

I invite men for my sexual pleasures – Ghanaian actress

Violette - July 13, 2019 0
Ghanaian entertainer, Tracey Boakye has admitted in a meeting that at her level now, she lacks the capacity to deal with relationship stress...

Within 6 Months, I Became An Orphan – Actress Queen Nwokoye Laments

Adedokun Moses - November 10, 2019 0
Nollywood actress, Queen Nwokoye has lamented about the state she found herself as the year runs out. The award winning actress via a post on...