Mohamed Salah has beaten Gareth Bale and Cristiano Ronaldo to the 2018 Puskas Award with his strike against Everton last December. 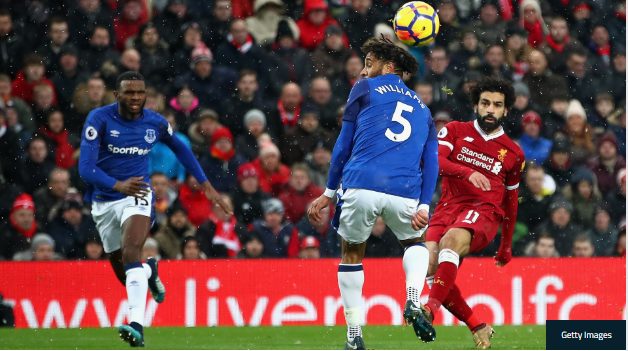 The award for the Liverpool star came as a surprise to many, with Gareth Bale heavily tipped to win the prize following his acrobatic overhead kick that gave Real Madrid the lead in last seasons Champions League final.

The Egyptian also had strong competition from Cristiano Ronaldo for his impressive finish against current club Juventus in April, a goal that was awarded UEFA goal of the season.

In total, there were ten goals nominated for the award, but Salah’s strike in the Merseyside derby was announced as the winner at a ceremony in London on Monday evening.

The goal saw Salah shrug off two players on the right hand side of the penalty area before curling in a beautiful effort into the top corner of the net from an improbable angle to give Liverpool a 1-0 lead in their Premier League tie against Everton last year.

The match eventually ended 1-1 with Wayne Rooney equalizing from the penalty spot after a controversial decision from referee Craig Pawson.

It was a remarkable debut campaign at Anfield for Salah, who arrived from Roma in June 2017. The 26-year-old netted 44 goals in all competitions for Liverpool last season and was also nominated for the FIFA Best Men’s Player of 2018 award.

The other goals nominated for this years Puskas award included Benjamin Pavard’s thumping effort in France’s World Cup last 16 clash against Argentina, a strike which went on to be chosen as goal of the tournament.

Olumide Oluwaseyi - July 11, 2017 0
Laffmycn Entertainment presents "BEEF with MC Shaggi" the second edition which is set to take place on the 30th of July 2017. The second edition features performances from various...

Adedokun Moses - October 19, 2019 0
It's Weekend already and all celebrities are gearing up for the day as they post their outfits on social media. Nollywood actress, Funke Akindele has...

Olumide Oluwaseyi - February 7, 2016 0
The Official Credit of the Photo Below goes to Obi Chukwudum who uploaded it on Facebook, and thanks to my TEch Friend  If for a...

Violette - September 5, 2019 0
The long-awaited revival of British crime drama Top Boy finally hitting Netflix this month, and Drake had a big role in making it happen....

#BBNAIJA: Diane Looking Cute as She Flaunts Her iPhone

Adedokun Moses - October 25, 2019 0
Former Big Brother Naija housemate, Diane has again shown how beautiful and sexy she is as she wow fans with another stunning pics. Diane who...