Tiwa Savage has acknowledged the contribution of her estranged husband, Teebillz, to her success.

She shared a post on Instagram, thanking God for how she started and where she was now. 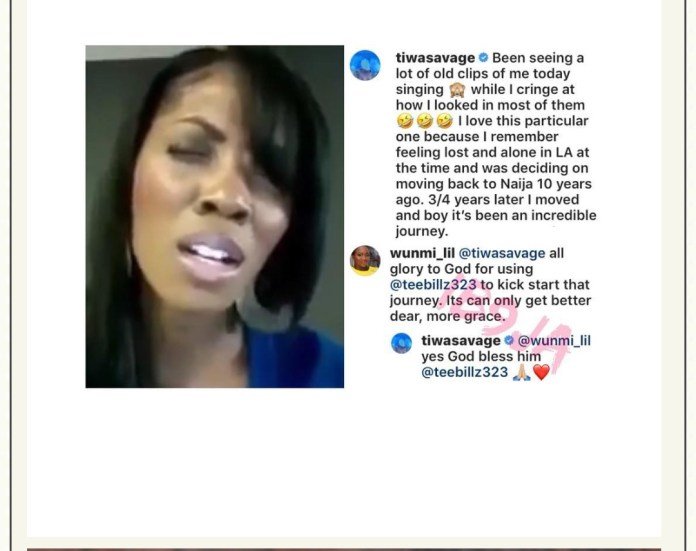 A few months back, Tiwa Savage allegedly filed for divorce from her estranged husband, Tunji Balogun, a.k.a TeeBillz.

According to media reports, all attempts by the couple to resolve their differences have failed, and Tiwa has decided to formally call it quit, citing ‘unsolvable issues’ as the reason for the decision.

However, Tiwa a.k.a ‘Marvin Record First Lady’, is yet to confirm nor deny the divorce issue.

The embattled couple have not been together since their marital crisis in 2016; Teebillz made their marital issues public as he wanted to commit suicide by attempting to jump into the Third Mainland Bridge in Lagos.

The duo then engaged in ‘war of words’ on the social media, as Teebillz alleged infidelity, among other accusations, on the part of his estranged wife.

Tiwa, who shares a son with Teebillz, in turn granted a 45 minutes video interview to debunk the accusations.

However, fans and industry watchers had assumed all was now well with the couple when many of their friends, colleagues and family members intervened, urging them to reconcile their differences.

Tee Billz had to testify on social media that all was now well with him, after he went through rehabilitation process in the hand of a seasoned life style coach, Lanre Olusola.

He said: “The way I handle things now is completely different from how I acted in the past.

“I do better now because I know better, and If I had gone through the experience before now, it probably wouldn’t make sense to me until I go through some challenging situations.

“But I thank God that I have been able to overcome all those through the guidance of my coach.”

Angelina Jolie Reveals The Secrets Behind Her 20 Tattoos

creebhills - September 17, 2017 0
This week Angelina Jolie displayed her sprawling tattoo collection – at the New York premiere of her new film, First They Killed My Father. The...

U.S Rapper The Game Shares Adorable Photo of his daughter sleeping on his Chested

creebhills - August 13, 2016 0
The Proud Father of a Beautiful Young Girl, shared Photo of her daughter while she was Sleeping in his Arms and resting her head...

My shows pulled 4 times more crowd than Rema’s, but people didn’t talk about...

Adedokun Moses - November 30, 2019 0
Singer and songwriter, Ric Hassani has lamented about the attention his music genre gets in the music industry. The talented singer who seems fed up...

Violette - November 15, 2019 0
Mercy Eke, Winner and Queen of the Just concluded big brother Nigeria televison reality show has not for a moment shown any sign of...

Adedokun Moses - December 30, 2019 0
Wife of Veteran Nigerian singer Ice K who is part of the musical duo, Artquake has been given a surprise birthday party by his...