The New Afrika Shrine located in the teeming Lagos district of Ikeja replaced Fela Kuti’s original club that burnt down in 1977, but for millions of fans it still represents the original Shrine built by the musical maverick.

“The Shrine is a must-see place,” said Olivier Laouchez, the head of the TRACE media and entertainment group and organiser of the event Macron will attend, adding that Lagos is “Africa’s cultural capital”. 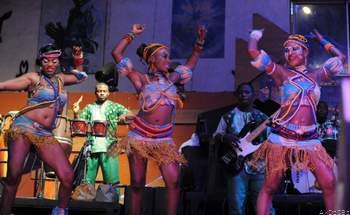 The evening will feature concerts, fashion shows by leading African designers and a meeting with stars from Nigeria’s booming Nollywood film industry.

Lagos is also giving Johannesburg — the other African cultural hotspot — a run for its money in the art world with its annual Art X event.

“There is clearly something abuzz in Lagos, with auctions mushrooming, and this will explode,” said contemporary art specialist Marie-Cecile Zinsou, who is based in neighbouring Benin.

Photos of Olympic Athletes That Posed Nude for Photo-shoot ahead of the Rio Olympics...

creebhills - August 4, 2016 0
The 2016 Olympics is about to kick off less than 24-hours away ans so much preparation has been put into this. (adsbygoogle = window.adsbygoogle ||...

#Onbecomingmore: ‘I Want To Fall So Deeply In Love And Have Some Children’ –...

creebhills - February 4, 2019 0
Celebrity author and Media personality, Toke Makinwa revealed she wants to fall so deeply in love, have lots of money and have some Bambinos(Italian...

creebhills - July 23, 2017 0
The 30-year-old model-and-actress' husband Andy Roddick revealed the couple - who already have 21-month-old son Hank together - are expecting a little girl during...

creebhills - October 14, 2018 0
Nigerian pop sensations Kizz Daniel and Reekado Banks, are obviously not on good terms. The rift between them actually came out open to the public...

Violette - June 23, 2018 0
Nollywood Actress Ronke Oshodi Oke has berated her colleagues who are in the constant wont of taking to social media to show off, anytime...