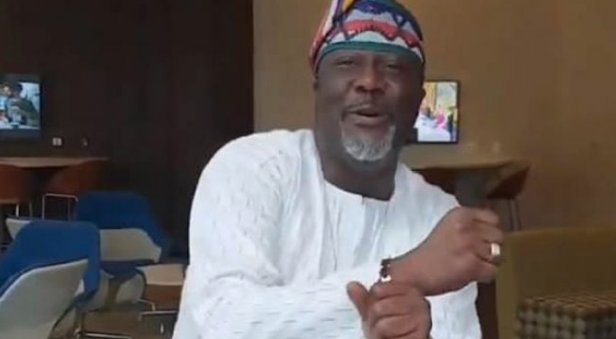 All Progressives Congress lawmaker, Dino Melaye has hinted at leaving the ruling party because according to him, he has suffered under the party. The Kogi state lawmaker said he could not wait to go to his home ‘the Peoples Democratic Party, PDP’ .

Melaye said this via his Twitter handle on Friday as he sang a popular song. See video below

See how Nigerians have reacted

The transfer window between APC and PDP just opened,
PDP first official transfer signing, his a big fish, songwriter, singer and a senator who is a comedian, Senator Dino Melaye

Not justifying Buhari for callung us lazy Nigerian youths
But see what is happening. DINO MELAYE IS MOVING FROM PDP TO APC TO PDP CAUSE HE IS LOOKING FOR THE WAY TO EAT MORE MONEY FROM THIS FINISHED ECONOMY. BUT ALL THE YOUTHS CAN SEE IS THE SINGING AND HOW HE NEEDS TO GET ALBUM

After @dino_melaye rubbished the PdP and said all sorts of nonsense against the PdP .. today he's seen dancing back to the PdP!

Politicians like you should be kept away from our democracy

Olumide Oluwaseyi - August 29, 2016 0
The Queen of Tennis Seems not to have any cold Feet going into the US Open 2016 starting today as she was seen at...

Olumide Oluwaseyi - October 14, 2018 0
US based actress, Laide Bakare has bagged double awards in Manchester. She made the announcement on her IG handle, appreciating God, her family and...

Olumide Oluwaseyi - October 28, 2017 0
Pregnant' Khloe Kardashian was disappointed when she arrived to make an appearance at her Good American pop up on Friday. In what was surely rather an...

Olumide Oluwaseyi - January 24, 2019 0
Pop star Davido sends death threat to man who allegedly scammed him of £10,000 and he has placed an unusual kind of bounty on...

Eddie Andy - November 19, 2017 0
Jaden Smith just released his long-awaited debut album SYRE and now he doubles down with an official music video for “Icon,” which features the...