Home NEWS Nicki Minaj’s dishes advise to ladies-Know your worth,I’ve been proposed to 3... 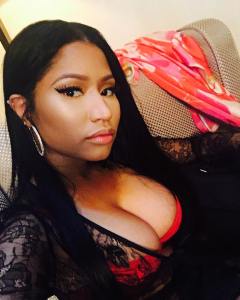 Nicki Minaj has dropped some words of advise to the female folk,asking them to know their worth.According to her,ladies should realize they are queens and shouldn’t accepted being cheated on,humiliated just to smile on the gram.

In a series of tweets,Nicki who has been linked to three men,Safaree,Meek Mill,and Nas  wrote

New boy asked if I could have his baby in a year & a half. On God I said: “ain’t pushin out his babies til he buy da rock”. Then I busted out laughing. He said: “I’ll put a ring on it. I’ll do anything it takes”. Yet all I could think of his how much I love my new found freedom.

“I Am Not A Lesbian” – Jenifa’s Diary Actress, Paschaline Okoli

#Queen, know your worth. You were a Queen before him. You’ll be a Queen after him. He can’t make or break you. Being equally yoked is what you should strive for. Spirituality is key. Once your spirit can soar on its own, then you are ready to “allow” him the privilege of ur time.

#Queen, know your worth. I’ve been proposed to 3 times; asked by 4 boyfriends to have their child. Being emotionally, mentally, or physically abused just to crack a fake smile on the gram & show off a ring is not happiness. Being cheated on, humiliated, belittled… for the gram? 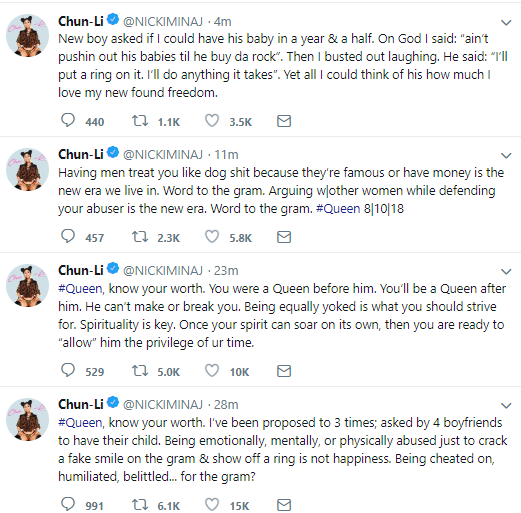 Why many people think I am wayward – Actress Tayo Odueke

Olumide Oluwaseyi - March 25, 2018 0
Yoruba actress and producer Tayo Odueke popularly known as Sikiratu Sindodo has shed more light on reason many think she is a wayward person. In...

Olumide Oluwaseyi - October 24, 2015 0
Empire's Music Co-Producer,Singer Ne-Yo's Fiance Crystal Renay is expecting a baby. For a few months now she and Ne-yo had been having rough paths in their relationship since she...

Only Parliament should elect the President, not the whole country- Actor Kwaku Manu

Violette - August 22, 2019 0
One of the most consistent Ghanaian actors over the years, has a political opinion to share. Kumawood Actor Kwaku Manu, who is a keen...

Violette - June 5, 2019 0
Nigeria's Representative at the United Nation UN, Prof Tijjani Mohammed Bande, has been chosen the President of the 74th UN General Assembly. The race...