This morning, a freak accident occurred in the Big Brother Naija house as Cee-C and Lolu who are currently paired in the bonding game refused to get along with each other leading to a series of arguments and disagreements. 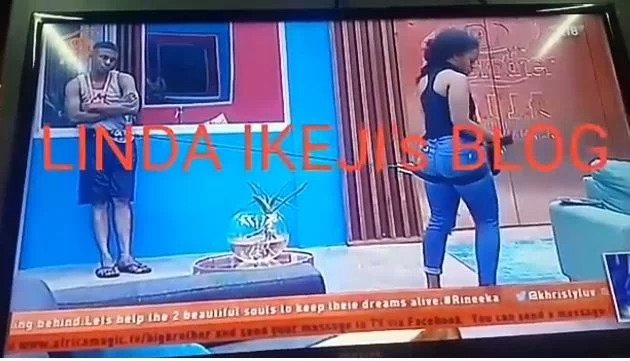 In one of such disagreements, Cee-C wanted to sit down but according to Lolu, she was rude with the way she said it so he demanded an apology which she refused him.

n anger, Cee-C attempted to forcefully sit down, thereby stretching the bonding string which got detached. In the process, it struck Lolu’s thigh region with force, leaving him reeling in pain.

Watch the horrific video below.

Davido is Definitely Richer than Me – Don Jazzy Reveals

creebhills - May 24, 2019 0
Mavin Records CEO, Don Jazzy aka Don baba J took to his Instagram , insta story for a quick question and Answer section with...

Adedokun Moses - January 28, 2020 0
Media Personality, Bolanle Olukanni has face the drama of an African Mother as her adorable mum reacts to her mode of dressing in an...

Let your Ex be!!! – Relationship Corner with Eddie Schwaggs

Eddie Andy - November 6, 2018 0
Hey guys, how are y'all doing? I hope you are enjoying the weather. Welcome to Relationship Corner where we discuss any issue concerning relationships,...

Adedokun Moses - October 13, 2019 0
Former Big Brother Naija housemate, Esther is really serving her followers and fans hot and beautiful photos of herself. The reality star and model who...

Agbani Darego shows off her sexy bikini body in front of a pool live...

creebhills - December 14, 2015 0
Former Miss Nigeria and Ex- Miss World, Agbani Darego is currently far away in china where this year's miss world beauty pageant would be taking place. she shared the...