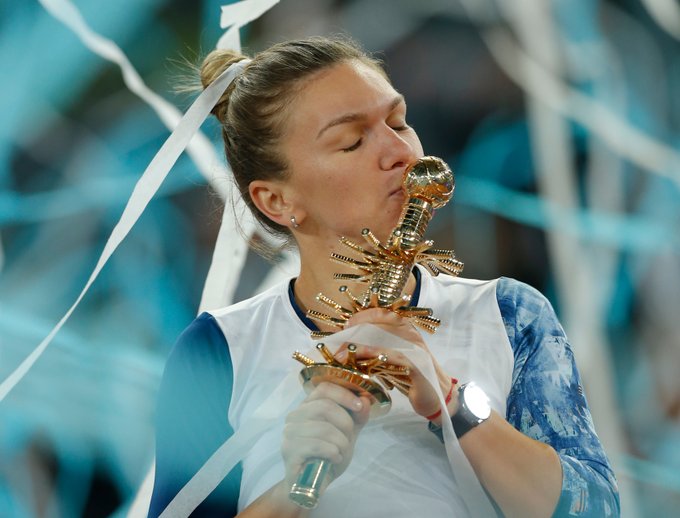 MADRID (AP) — Rafael Nadal is near his best again, and he showed it with an emphatic win over a rival he hadn’t beaten in three years.

Nadal ended his seven-match winless streak against Novak Djokovic with a 6-2, 6-4 win that put him in the Madrid Open final again on Saturday.

Nadal overpowered Djokovic, and converted on his third match point to earn his first victory against the second-ranked Serb since the 2014 French Open final. Nadal had lost 15 straight sets against Djokovic, and won only one of the last 12 matches against him in four years.

“To beat an opponent such as Novak, it gives you a lot of confidence. It shows you you’re working in the right way,” said Nadal, who has thrived after two years struggling with his game.

On the women’s side, Simona Halep of Romania won her second straight Madrid title by defeating Kristina Mladenovic of France 7-5, 6-7 (5), 6-2 in nearly three hours, becoming the first player to successfully defend the title since Serena Williams in 2013.

It was the first title of the season for the eighth-ranked Halep, who was the first player to make it to three Madrid finals. She lost to Maria Sharapova in 2014.

Mladenovic was in her second straight final, and fourth of the year. She won her first career title in St. Petersburg in February.

It was another categorical win for Nadal in what has been a superb season for the fifth-ranked Spaniard, who will be trying to win his third straight title on Sunday. He can also tie Djokovic with 30 titles in Masters 1000 events.

It was Nadal’s 14th straight victory, and his tour-leading 33rd for the year.

The four-time Madrid champion will play the title game against Dominic Thiem of Austria or Pablo Cuevas of Uruguay.

It will be the Spaniard’s eighth final at his home tournament, and the first since losing to Andy Murray in 2015. Nadal last won in Madrid in 2014.

“I can’t be any happier,” Nadal said. “It means the world to me to make it to another final here in Madrid.”

Nadal has been playing some of his best tennis this year. He’s reached six finals this season and is coming off consecutive titles in Monte Carlo and Barcelona.

“It was an important match for me because it meant continuing with the good dynamic that I’ve been carrying for several months,” Nadal said. “I knew that I had to play well. It’s true that he made some mistakes, but he fought until the end.”

Djokovic hasn’t reached a final since winning his first tournament of the year in Doha. This was his first semifinal since he won that title in January.

“I did try my best,” Djokovic said. “It wasn’t a very high quality of tennis from my side. Just his quality was very high. He managed to do whatever he wanted really, especially in the first set.”

Djokovic didn’t have to play the quarterfinal in Madrid because Kei Nishikori withdrew before the match because of a wrist injury. This was Djokovic’s first tournament since splitting with longtime coach Marian Vajda.

With Cristiano Ronaldo and Olympic great Nadia Comaneci watching courtside, Nadal was aggressive from the start, and had 20 winners, including seven off his backhand.

He conceded only two break opportunities to Djokovic, who converted one early in the second set. Nadal had six break chances, converting two in each set.

It was the 50th meeting between the two players, with Djokovic still ahead 26-24.

My best moment of making my album was recording some part of it in...

Violette - August 28, 2019 0
The Blackstar motherland has a special place in the African Giant’s heart. Oluwa Burna has made one of the best albums to come out...

Violette - September 5, 2019 0
With Djokovic and Federer out of the competition, Rafael Nadal stands a better chance of winning the competition. Nadal has beaten Diego Schwartzman at...

‘I think social media should be banned in Nigeria’ – Tboss

Violette - June 2, 2019 0
Former BBNaija housemate, TBoss has called for the ban of social media in Nigeria - In a post shared on her social media page,...

Olumide Oluwaseyi - December 12, 2017 0
In an emotional Instagram post earlier today, Serena Williams took out time to count her blessings; from winning a grand slam, having a baby and getting...