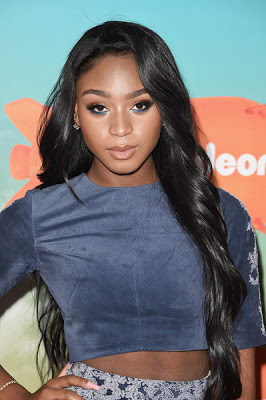 The 20-year-old singer has come under heavy social media attack after Video of her interview with Galore went viral as she been called Unkind and all sought of names simply because they felt she shaded Cabello by intentionally taking too long to say anything nice or substantial about her.

the Interview took place on Facebook last week and normani was asked a Few question, one of such was that she should describe her bandmates best qualities.

“Over the past four years of being in the public eye I’ve learned to grow a thick skin to critics and those who may not like me,” she wrote. “I’ve never been one to deny anyone of their opinions, but over the course of this last week and especially over the last 48 hours I’ve not just been cyber bullied, I’ve been racially cyberbullied with tweets and pictures so horrific and racially charged that I can’t subject myself any longer to the hate. I’m not the first black female celebrity to deal with this and I’m sure I won’t be the last. I want to take this moment to say Love goes much further than hate in this world. Hiding behind a computer and putting people down, especially for the color of their skin doesn’t make you cool, it makes you a coward!’
Her 19-year-old bandmate, Camilla, also came to her defence, tweeting:
‘I stand by the words “love only”, meaning I won’t tolerate on my timeline any kind of hate, racism, or discrimination towards ANYONE. period. You don’t have to hate on somebody else to support me- I don’t appreciate it and it’s not what I’m about.. Be kind or move on.’
READ ALSO
Music: Tiwa Savage - One