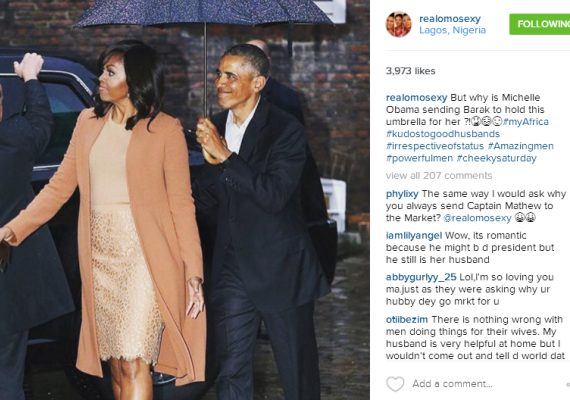 The Nollywood Actress, singer, mother and also wife a pilot Captain Matthew Ekeinde was recently Dragged on social media when she revealed in  on of her Previous Interviews that her Husband does Market shopping while she cooks the food.

Well here is a way to hit back at her haters as she shares Photo o f the President of the united States of America, Barack Obama holding an Umbrella over his wife’s head as they Head out.

she captioned it, But why is Michelle Obama sending barak to hold this Umbrella for her?

One thing we don’t know is that the western culture has so much respect for women, something far more lacking in Africa that’s why we are where we are till date.
READ ALSO
BBNaija: Former housemate, Cee-C makes her first Nollywood debut

Singer Simi rocks Ankara bum-shot and braided Hairstyle as she relax by the Pool...

Olumide Oluwaseyi - December 26, 2018 0
The Lovin singer is enjoying marriage Bliss as reports of her getting engaged to her heart-robe Nigerian singer Adekunle Gold in a low key...

I don’t have any issue with Tiwa Savage at all – Singer Victoria Kimani...

Olumide Oluwaseyi - April 13, 2019 0
Kenyan-born singer, Victoria Kimani, set the Internet into frenzy last week after she dropped her version of Kizz Daniel’s Fvck You challenge. In her song,...

Olumide Oluwaseyi - March 27, 2015 0
The  Former Miss Nigeria, Shared this beautiful pics of her self on her page. although she is no longer the current miss Nigeria she does...

Anto Speaks On The Kind Of Man She Can Never Marry

Violette - July 1, 2018 0
Ex-BBNaija Housemate, Antoinette Lecky, is one damsel that doesn’t want a man that would take full charge of her life in the name of marriage. The 28-years-old...