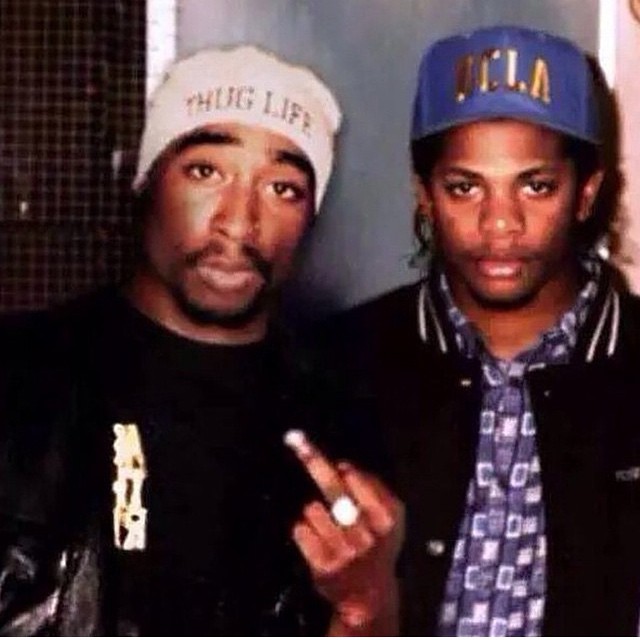 The Photo was Uploaded by Keyshia Cole who was  been mentored at the time 2pac was still alive.

although she did hit fame and lime light after the release of her first album which sold over 17 million copies in the United States.

But ever since then her love for 2pac and the outlaw group never ceased nor stopped.
when you look through her Instagram Photos you would always find an old photo of 2pac in there.

The Photo Below shows 2pac and Easy E back in the days when they where grinding and Hustling in the Music Business.

Easy E was the one that owned the Ruthless Record Label and had the Likes of Dr Dre and some other Late 90’s Rapper on their Label Including Ice Cube known as Q who later left the record label.

If you want to find out more Watch the Movie Straight Outta of Compton.
READ ALSO
Gifty Powers slams social media trolls criticizing her for not being married

BBNaija: I will choose friendship with Dora over relationship with Nengi – Ozo (Video)

Adedokun Moses - July 25, 2020 0
The hot cake at the Big Brother Naija Lockdown season 5, Ozo have just shown the world how much he cares for Dorathy as...

Adedokun Moses - October 14, 2019 0
As they say, you need a good music for a party to get started but it takes a good dancer to make the party...

Olumide Oluwaseyi - April 24, 2016 0
The Former Miss World beauty Pageant winner was a Guest at the UBA CEO Awards which took place some weeks back. Agbani Darego was simply sexy, Beautiful and Breathtaking as she Dazzled...

Eddie Andy - May 6, 2018 0
Nollywood actress, Regina Daniels who wields more influence than several of her older counterparts was recently pictured in the pool with some guy rumoured...